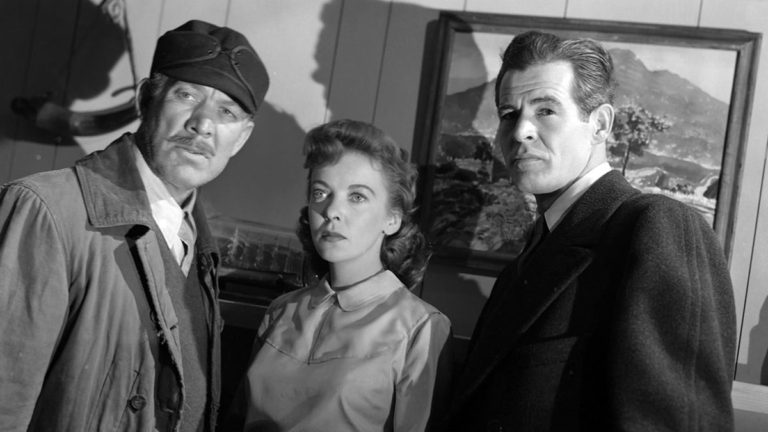 Here we go! After a year, we are finally meeting again to experience noir dramas together and share unforgettable film adventures, this year at a new venue! The first of the chambers of Český Šternberk Castle, which will be transformed into screening rooms for five days, will open to visitors of the Noir Film Festival at 4 pm. The first film to be screened at the 9th edition will be Crossfire (1947) with „old familiar“ Robert Ryan, Robert Mitchum and Gloria Grahame in the story of an investigation of a violent murder whose perpetrator is hiding among a group of American soldiers. High Wall (1947), in which Robert Taylor, as a war veteran, comes to terms with his memory loss and the violent death of his wife, which he allegedly caused, will also be shown in the early evening. The first day will also feature one title from Ida Lupino’s directorial retrospective, The Hitch-Hiker (1953), which will be re-released in Saturday’s midnight screening.

In Hana Maciuchová’s courtyard, which will be the so-called „heart of the festival“, jazz tunes by saxophonist Kamil Janský, who has played in bands such as Laura a její tygři, OverHead and D.O.R.A. An hour later, the opening ceremony will take place, where actors Jiří Dvořák and Jaromír Hanzlík will christen the festival’s DVD edition of the film Závrať (Vertigo, 1962). During the gala evening, there will also be a commemorative event for former festival patron, actress Hana Maciuchová (1945-2021). The first day of the festival will culminate with an open-air screening of the classic American noir On Dangerous Ground (1951), starring Robert Ryan as an aggressive policeman and Ida Lupino as the blind woman who offers him salvation.