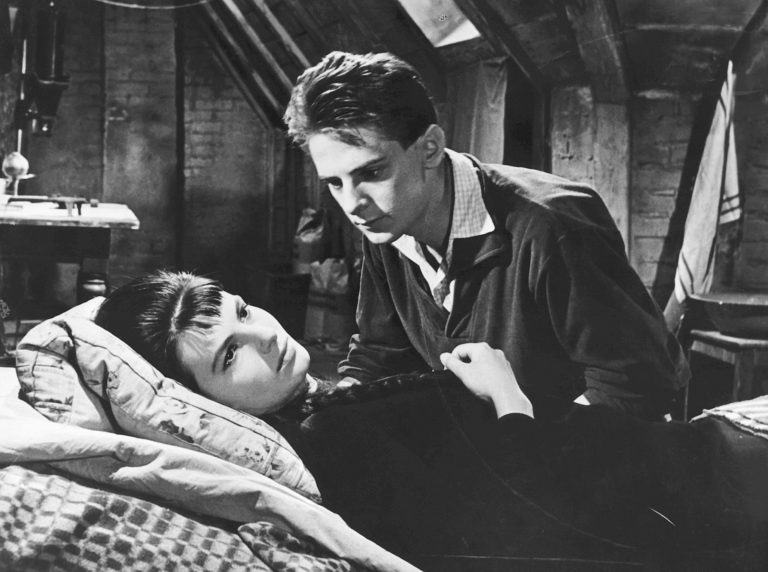 The festival traditionally offers Czechoslovak films featuring various degree of noir elements, and this year will be no exception. In The Plain Old Maid (1959), a psychological drama with murder mystery elements directed by Miroslav Hubáček, Dana Medřická plays a strict accounting auditor whose life changes when she meets the editor Štefl (Karel Höger). The noir element becomes apparent during the night scenes and several sophisticated visual compositions. Jiří Weiss’ Romeo, Juliet and Darkness (1959), adapted from a novel by Jan Otčenášek, renders the claustrophobic feeling of no escape. When Pavel, a student (Ivan Mistrík), hides a Jewish girl Hanka (Daniela Smutná) during the Heydrich’s Protectorate in the attic of an apartment building, we know that it’s only a matter of time before her fate catches up with her. Vertigo (1962), directed by Karel Kachyňa, shows the fresh talents of Eva Šolcová and Petr Skála in the leading roles and the suffocating atmosphere full of unexpressed longing which is accented by Josef Vaniš’s camera work utilizing the properties of a wide shot. The demon of alcohol rears its head in the films we have already screened in previous years (for example, Martin Frič’s Today for the Last Time). The intimate drama by František Vláčil, Snake Poison (1981), deals with similar issues where the arrival of the lively Vlaďka (Ilona Svobodová) breathes new life into the days of her alcoholic father (Josef Vinklář).

The Czechoslovak section is accompanied by two special screenings, TV productions we singled out to pay tribute to a longtime patron of the festival, actress Hana Maciuchová, who passed away on 26 January this year. The crime film The Man in the Net (1973), directed by Jiří Sequens and written by Jiří Hubač, is an excellent adaptation of a novel by Hugh Wheeler (written under the pseudonym Patrick Quentin). John, a painter, seeks to redeem himself in a city which sees him as an outcast. However, he gets help from a group of children for whom looking for the real killer is more like a game. A novel by Richard Lockridge was an inspiration for a film by Zdeněk Kubeček, Death on the Hour (1981). The film reveals a story of a cunning murder committed in a competitive fight and pressure on independent American television. Last but not least, you can also look forward to a screening of the silent film by J. S. Kolár set in Rudolphinian Prague, The Arrival from the Darkness (1921), which will be accompanied by live music.